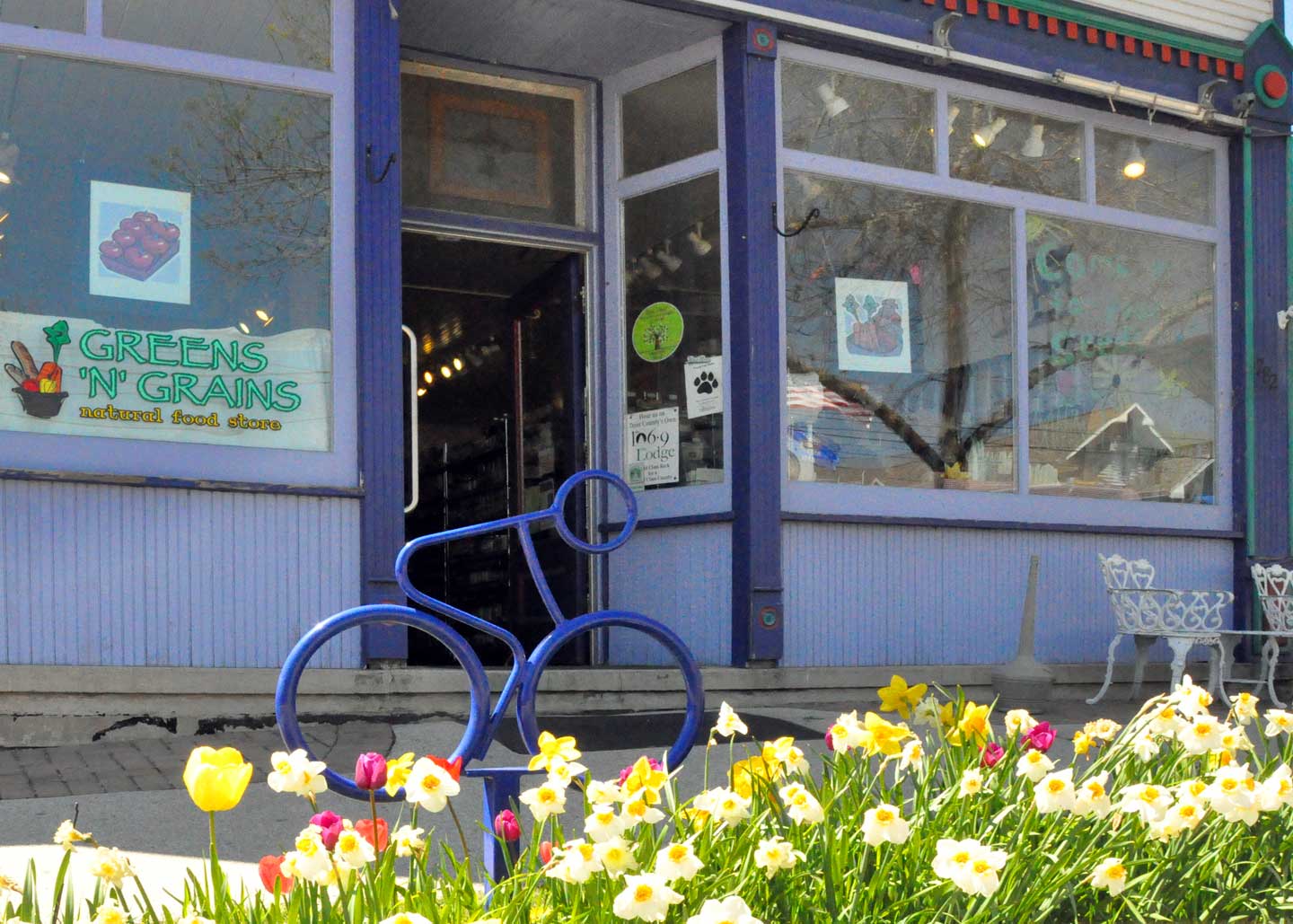 Come celebrate Earth Day at Greens N Grains with live music, specials in the Cafe and some great deals on products…

We are looking forward to a special appearance by singer/songwriter Cathy Grier, aka “NYC Subway Girl” on Earth Day, April 22 from 1-4 pm here at Big Purple (the GNG complex) outside, weather permitting. Cathy’s diverse and eclectic career highlights include: opening for Laura Nyro and Joan Armatrading, touring Germany with a French girl band, an MTV basement tape award, writing a #1 French dance hit “Misery” for artist Indra, recording CD ‘Comin’ Back To Me’ at Magic Shop NYC, performing at Avery Fischer Hall, BAM and being featured on CBS Sunday Morning. Somehow, she found her way to Door County and has settled in Sturgeon Bay!

On Earth Day weekend, Saturday and Sunday, April 22 – 23, Greens N Grains will give out FREE Earth Days reusable bags for any purchase over $75 and the first 50 customers will receive a free packet of Seed Savers Lettuce seeds! We will also have a special deal on the book – The Better World Shopping Guide – 2nd Edition: Every Dollar Makes a Difference regularly $11.95 special for Earth Day $8.00!

Save on all Yogi Teas -2/$6, Seventh Generation and Ecos laundry detergents, Dr. Bronner’s 32 oz. soaps for only $12.49. Enjoy samples from our Greens N Grains Cafe – Green Smoothies and amazing Vegan desserts! plus lots of samples.

The Origins of Earth Day!

The idea for a national day to focus on the environment came to Earth Day founder Gaylord Nelson, then a U.S. Senator from Wisconsin, after witnessing the ravages of the 1969 massive oil spill in Santa Barbara, California. Inspired by the student anti-war movement, he realized that if he could infuse that energy with an emerging public consciousness about air and water pollution, it would force environmental protection onto the national political agenda. Senator Nelson announced the idea for a “national teach-in on the environment” to the national media; persuaded Pete McCloskey, a conservation-minded Republican Congressman, to serve as his co-chair; and recruited Denis Hayes from Harvard as national coordinator/

On April 22, 1970, 20 million Americans took to the streets, parks, and auditoriums to demonstrate for a healthy, sustainable environment in massive coast-to-coast rallies. Thousands of colleges and universities organized protests against the deterioration of the environment. Groups that had been fighting against oil spills, polluting factories and power plants, raw sewage, toxic dumps, pesticides, freeways, the loss of wilderness, and the extinction of wildlife suddenly realized they shared common values.

Earth Day 1970 achieved a rare political alignment, enlisting support from Republicans and Democrats, rich and poor, city slickers and farmers, tycoons and labor leaders. By the end of that year, the first Earth Day had led to the creation of the United States Environmental Protection Agency and the passage of the Clean Air, Clean Water, and Endangered Species Acts.